Forearm joint stability is thought to be conferred by three constraints (1): the proximal radioulnar joint (PRUJ), the interosseous membrane (IOM) and the distal radioulnar joint (DRUJ). With the forearm thus considered as a single anatomical, articulating unit, a traumatic longitudinal instability of this ‘joint’ was first described by Peter Essex-Lopresti in 1951 (2). It is caused by a usually high-energy, longitudinal compression vector that dissipates through the three joints of the forearm, resulting in a complex of lesions that probably starts with a transverse rupture of the central band of the IOM (3). While the IOM is a group of multiple ligaments including the accessory band, distal oblique bundle, proximal oblique cord and the dorsal oblique accessory cord, the central band is considered to be the part which most strongly resists longitudinal and transverse radioulnar forces (4).

According to Soubeyrand’s locker-based classification, lesions of two of the three forearm constraints (PRUJ, IOM and DRUJ) lead to a transverse radioulnar instability, with resultant loss of forearm rotations if both lesions are not addressed properly (5). Examples of such lesions include Galeazzi’s fracture (distal radial shaft fracture with DRUJ dislocation), Monteggia’s fracture (proximal ulnar fracture with PRUJ and radiocapitellar joint dislocation) and crisscross injuries (concomitant PRUJ dislocation and DRUJ dislocation with intact forearm bones and intact IOM) (6). However, longitudinal forearm instability only results when there is a lesion of all three constraints.

Unfortunately, missing the initial diagnosis in the latter situation can lead to a chronic, progressive, proximal radial migration and DRUJ dislocation that is hard to treat while harboring substantial functional deficits (7, 8). Therefore, exactly defining Essex-Lopresti (EL) injury is very important, especially in the acute setting. However, while EL injury has been given considerable attention in the recent orthopedic literature (9), diagnostic criteria do not seem to be used uniformly throughout the literature, probably due to its rarity in clinical practice.

We aimed to systematically review clinical studies on the employed definitions of longitudinal forearm instabilities referred to as EL injuries, IOM injuries or longitudinal radioulnar dissociation (LRUD). Additionally, we aimed to establish if the definition used affected reported outcome 1 year after surgical treatment. For uniformity in the present paper, we will refer to the abovementioned forearm injuries as EL injuries.

The review process was conducted according to the Preferred Reporting Items for Systematic Reviews and Meta-Analyses (PRISMA) guidelines (10). The review was not registered.

Studies eligible for this systematic review examined acute (<4 weeks old) and chronic (>4 weeks old) (11) longitudinal instabilities of the forearm. Inclusion criteria were (1) original studies involving clinical patients, (2) studies reporting on EL injury, LRUD or IOM injury resulting in longitudinal instability, (3) studies reporting on some form of diagnostic or treatment modality and (4) studies published in English, Dutch, French, Spanish or German language. Biomechanical studies, consensus statements and surveys were excluded. For clarity, only cases with proximal longitudinal forearm instability, that is, with proximal 1/3 radial shaft bony pathology as part of the cause of the instability, were included. Importantly, patients with only transverse radioulnar instability, such as Galeazzi fractures, Monteggia fractures and crisscross lesions, were excluded. Also, patients with multiple traumatic lesions of the forearm other than osteoligamentous structures, such as tendon injuries, were excluded.

A systematic literature search was performed with the help of a medical librarian (SPV) in PubMed, Embase/Ovid, Cochrane Database of Systematic Reviews/Wiley, Cochrane Central Register of Controlled Trials/Wiley, CINAHL/Ebsco and Web of Science/Clarivate Analytics, using the search terms mentioned in Supplementary Appendix 1 (see section on supplementary materials given at the end of this article), from inception until October 1, 2020. The search was rerun/updated on January 4, 2022. The updated search strategy was consistent with the original search. The obtained titles and abstracts were independently screened by two reviewers (BK and MB). The full-text papers were examined by three authors (BK, MB and RB), and in case of disagreement, a final decision on inclusion was made by discussion. Additionally, the bibliographies of all potentially eligible full-text articles, including those of review papers, were hand-searched.

For clinical studies reporting on patient outcomes, the risk of bias was evaluated using the modified Coleman methodology score (12), which is a 15-item questionnaire with scores ranging from 0 to 100. Scores of 85–100 are considered excellent, 70–84 good, 55–69 fair and less than 55 poor. It was designed for quality assessment of surgical studies.

Reported EL injury definitions were subdivided based on anatomy, preoperative clinical tests, preoperative radiographic characteristics, intraoperative tests (e.g. the joystick test) (13) and nomenclature (e.g. ‘EL injury’ or ‘LRUD’). We recorded employed treatments for all studies. We noted reported outcomes of studies with a minimum of 1 year of follow-up.

All outcome measures reported in the studies were extracted and assessed. Additionally, complications, reoperations and radiological outcomes (specifically, ulnar variance, when possible) were noted.

The methodological quality of included studies was generally poor. In fact, the Coleman score was less than 55 for all studies. Studies that had been published in the last 10 years had higher mean Coleman scores when compared to older studies (25.9 and 15.8, respectively).

We included 266 patients with a mean age of 40 years. A total of 89 patients were female and 103 cases were acute cases (<4 weeks old). Overall, the mean time from injury to the first operative treatment of EL injury was 57 weeks.

The most frequently stated definition was EL injury without further elaboration (n  = 24 studies, Table 1). Notably, 39 of 47 studies did not mention an IOM lesion as part of the EL injury.

Nomenclature and definitions of EL injury used in the literature.

The most commonly stated clinical criterion for both acute and chronic EL injury was wrist pain in the presence of a radial head fracture (Table 2).

Clinical criteria for EL injury used in the literature in patients with a known radial head fracture.

The most commonly used radiographic preoperative criterion for EL injury was a positive ulnar variance of >3 mm, compared to the contralateral side (three studies, Table 3). However, this cutoff was highly variable among studies, if stated at all. Furthermore, ultrasound (US) was used to detect IOM ruptures in eight studies.

Radiographic preoperative and intraoperative criteria for EL injury used in the literature.

Due to the high heterogenicity of patients and combinations of treatments, we were unable to summarize outcomes for specific patient subgroups.

In our review, more than half of the studies did not mention any definition and 39 of 49 studies did not mention an IOM lesion as part of the injury. This is considered remarkable, because tardy treatment of these injuries leads to substantially worse outcomes compared to early treatment (22, 52, 56). Treatment of acute cases typically involves stabilization of the proximal radius (osteosynthesis or arthroplasty) and of the DRUJ. There is currently insufficient evidence regarding an additive effect of IOM repair/reconstruction in these cases (9).

Due to high variability not only in definitions of EL injury but also in the outcome measures, assessment of whether there was a relation between definition and outcome was unrealistic. Part of the observed high variability in the employed definitions (especially the cutoff value for positive ulnar variance) may be caused by authors reporting on actual observations instead of reporting on upfront-stated definitions. While this confounding factor may be a limitation of our review, it even more delineates a lack of consensus and possibly a lack of understanding on (early) clinical diagnosis of EL injury.

For the latter, more knowledge on distinguishing clinical features of EL injury is paramount, especially in the acute phase. In those studies reporting on clinical features (less than half of the studies), most patients had some form of forearm or DRUJ-derived pain on clinical examination, and these signs merit further investigations. In the setting of a proximal radial fracture, Fontana et al. used the C-Fingers comparative test for diagnosing IOM rupture and the tilt test for diagnosing DRUJ instability (56). To more specifically appreciate the value of these signs, we would recommend future authors to report the clinical features of their EL injury patients in detail.

In case of clinical suspicion, longitudinal instability may be detected by observing radial shortening on elbow radiographs (contact between radial neck and capitellum) and comparative wrist radiographs (positive ulnar variance) and DRUJ incongruency on wrist radiographs. As is evident from our review, a cutoff value for the amount of ulnar shortening at the level of the wrist is unknown and is further obscured by the variability of ulnar variance among patients. Therefore, we recommend (i) to take bilateral wrist radiographs and (ii) to also specifically look for DRUJ widening. Still, in the acute setting, there may be no radiographic signs of radioulnar incongruency, while in fact longitudinal radioulnar instability is present.

Static instability can indirectly be assessed on MRI. The pitfall is that IOM and/or DRUJ injury may be mistaken for longitudinal radioulnar instability. For example, Hausman et al. found partial IOM lesions in 9 of 14 patients with Mason 1 radial head fractures, with good results after early mobilization (57). So, not all additional injuries as diagnosed on MRI do need surgical treatment. However, Grassman et al. have suggested that rupture of the IOM merits K-wire DRUJ stabilization in addition to radial head fracture treatment, even if there is no radial shortening radiographically. They reported good results using this protocol (58). Still, it is formally unknown if these patients really had a dynamic longitudinal instability and, so, if some of these patients could be at risk of being overtreated.

A more dynamic way to detect longitudinal instability is US. As infrequently reported as MRI by different authors, US is mostly used to detect IOM tears, similar to MRI. However, Fontana et al. reported the use of a US axial stress test to assess for dynamic instability in case of the absence of static radial proximal migration (56). As MRI detects injury and US detects instability, we would opt for studying the diagnostic value of both MRI and dynamic US (axial stress test) in patients with radial head fractures and wrist pain.

The gold standard for longitudinal radioulnar instability is an intraoperative radius pull test, even though the defined cutoff value of radial shortening (≥3 mm, during a 20 lb longitudinal pull) is based solely on a cadaveric study (59).

Quite surprisingly, although regarded as a golden standard, the test was only reported in 5 of 19 studies on acute cases. The radius joystick test was only used in three papers, while reported to have a high diagnostic accuracy (13). Although the term LRUD suggests that they key issue is longitudinal instability, the joystick test mainly assesses transversal instability. Yet, it could be a more sensitive test (3).

The variability in treatment strategies was even higher in studies reporting on chronic cases, while more recent studies tended to employ IOM reconstructions and some form of DRUJ reduction in addition to the radial head treatment. Unfortunately, with the multitude of clinical definitions and the quite inconsistent reporting of outcome measures (Supplementary Appendix 2), we were unable to make any comparisons between treatments. For future studies, we recommend reporting at least on range of motion of the elbow, forearm and wrist, and patient’s satisfaction.

In conclusion, there is no clear and accepted definition of EL injury in the literature. In order to prevent underdetection of acute EL injury, a radial head fracture in a patient with wrist and/or forearm pain should raise awareness of the possibility of an EL injury. Comparative radiographic studies and some form of dynamic assessment of longitudinal radioulnar stability should be performed to complete the assessment and avoid late diagnosis and treatment.

The authors declare that there is no conflict of interest that could be perceived as prejudicing the impartiality of the research reported.

EFORT Open Reviews is committed to supporting researchers in demonstrating the impact of their articles published in the journal.

As an open-access journal, EFORT Open Reviews articles are immediately available to read on publication, without restriction. The two types of article metrics we measure are (i) more traditional full-text views and pdf downloads, and (ii) Altmetric data, which shows the wider impact of articles in a range of non-traditional sources, such as social media.

More information is on the Reasons to publish page. 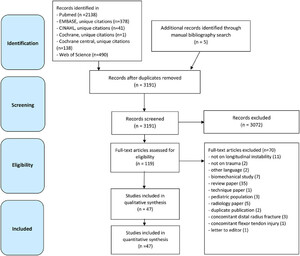