The incidence of humeral shaft fractures is estimated at 13 per 10 000 patients per year (1), amounting to 1.0–3.0% of all fractures (2, 3, 4). Humeral shaft fractures may be treated by conservative or operative modalities, with specific constellations as polytrauma, vascular injury, instability, or open fracture demanding a surgical approach (5, 6). The frequency of surgical therapy has increased over the years (7), including plate osteosynthesis via a conventional open reduction and internal fixation (ORIF) or minimally invasive plate osteosynthesis (MIPO), and retrograde and antegrade intramedullary nailing (IM) (6, 8, 9). Complications of both conservative and operative treatment approaches are non-union, while post-operative infections and iatrogenic radial nerve palsy (iRNP) do naturally occur following surgical therapy.

As complication profiles are known to differ between conservative and surgical therapy, operative techniques, and implant types, but this evidence is largely based on individual comparative studies, the herein performed systematic review and meta-analysis aim at analysing the outcome for treatment of humeral shaft fractures, focusing on risk for non-union, iRNP, and post-operative infection.

The current systematic review adhered to the PRISMA guidelines (10). A literature search in PubMed was performed for the current systematic review and meta-analysis, using the following search term: ((humerus) AND (shaft)) AND (fracture). All studies published from 1 January 2020 until 21 December 12 were potentially eligible (Supplementary Table 1 for full search code, see section on supplementary materials given at the end of this article). Notably, studies identified through other sources were not limited to a specific publication date.

All other publications, including (systematic) reviews, meta-analyses, Cochrane reviews, case reports, expert opinions, editorials, study protocols, non-comparative studies, those with insufficient information, pathological fractures, and non- English or -German articles were excluded. Data extraction was performed by one of the co-authors (MAS). In case of discrepant findings, decision towards article inclusion or exclusion was reached after thorough consideration and discussion amongst co-authors (SB, MAS).

The Newcastle–Ottawa scale (NOS) for non-randomised case–control and cohort studies was used to assess quality of all publications included (12). Notably, also the quality of those eight studies reporting on randomised cohorts was assessed with the NOS to allow comparability to publications with non-randomised cohorts. The NOS itself is based on the three items selection (maximum 4 points), comparability (maximum 2 points), and outcome (for cohort studies; maximum 3 points) or exposure (for case-control studies; maximum 3 points). A total score ranging from 0 to 9 results from adding the scores of individual items, with higher values indicating higher study quality (12).

All statistical analyses were performed with Stata/SE 16.1 for Mac (StataCorp LLC, College Station, Texas, United States). For each outcome parameter and comparison group, random effect models using restricted maximum likelihood methods were calculated and relative risks (RR) with corresponding 95% CI provided. RCTs, prospective case–control studies, and retrospective case–control studies were pooled, thus increasing the sample size, as previously described (13, 14, 15). Heterogeneity between studies pooled in each model was assessed with Higgins I2 (16). Small, medium, and large heterogeneity was defined as I2 amounting to ≤25%, >25–<50%, and >75%, respectively (16). Harbord test was used to assess presence of publication bias (17). In case heterogeneity was medium to large, and/or publication bias was present, additional sensitivity analyses to assess the robustness of findings were performed. As recommended by the Cochrane Handbook for Systematic Reviews of Interventions, studies with zero events in both arms were excluded from the meta-analysis itself (18).

Description of studies included together with Newcastle–Ottawa scale (NOS).

Subsequently, the three outcomes, iRNP, non-union, and post-operative infection, will be outlined for individual comparator groups.

All three studies comparing anterior or anterolateral with posterior approach to the humeral shaft and reporting on post-operative radial nerve palsy risk were level IV (8, 9, 44). Following a posterior approach, risk of developing iRNP was significantly higher in comparison to an anterior or anterolateral approach (RR: 2.68; 95% CI: 1.34–5.36; P  = 0.005; Fig. 3B). Heterogeneity was small (I2 = 0.0%), and no publication bias was found (Harbord’s P  = 0.903).

Three studies reported on infection risk depending on surgical approach chosen (all level IV (8, 9, 44)). One study (9) reported on zero events in both arms and was thus excluded.

According to the meta-analysis including the remaining two studies, RR for post-operative infection following a posterior approach was 0.95 (95% CI: 0.14–6.66; P  = 0.960; Fig. 6B) in comparison to anterior/anterolateral approach. Heterogeneity was small (I2 = 0.0%). Publication bias could not be assessed.

According to this systematic review and meta-analysis involving 7688 patients with humeral shaft fractures, there appears to be an elevated risk for iRNP following ORIF in comparison to IM, ORIF in comparison to MIPO, as well as after posterior approach vs anterior or anterolateral approach. Also, ORIF is associated with higher post-operative infection risk as compared with IM. While non-union risk is comparable between ORIF and IM, and between anterior/anterolateral and posterior approach, conservative treatment is associated with a significantly higher non-union risk when compared with any surgical therapy for humeral shaft fractures.

Similar to a large analysis of the American Board of Orthopaedic Surgery (ABOS) database by Gottschalk et al., we observed an overall significantly higher risk for iRNP after ORIF in comparison to IM (6). Furthermore, our results are in line with those made in previous meta-analyses involving 18 (59), 10 (60), 10 (5) and 3 studies (61), respectively.

Additionally, for MIPO vs ORIF, a five-fold increased risk for intraoperative radial nerve injury was found, corroborating the results published by Zhao et al. in a network meta-analysis involving two RCTs (62). Of note, the estimated risk – as reflected by the odds ratio – reported by Zhao et al. was relatively higher than the herein observed risk – represented by the RR – which may be due to the different methodological approaches chosen, as well as a potential over-estimation of the OR due to an event rate exceeding 10% (63, 64). However, as in our meta-analysis, 8 of 18 and 2 of 4 studies comparing IM with ORIF as well as MIPO with ORIF, respectively, were non-randomised in their nature, it cannot be ruled out that patients undergoing open reduction had injuries contraindicating any closed reduction (e.g. extensive soft tissue involvement, multi-fragmented fracture (65, 66)) that would by themselves have increased the likelihood of the radial nerve being in danger. Interestingly, we also observed a significantly higher risk of iRNP in case a posterior rather than anterior or anterolateral surgical approach to the humeral shaft had been chosen, which could as well be caused by a selection bias as surgeons may have attempted to explore an already endangered radial nerve via a direct posterior exposure of the humeral shaft.

Bearing these complications in mind, conservative treatment for humeral shaft fractures is a historically well-established alternative (66, 67). Nevertheless, the rate of operative treatment has steadily increased over the years, with today roughly one-third of patients – based on data from 2011 – still treated by conservative measures (7). Albeit a conservative approach naturally lacks surgery-associated risks, a longer immobilisation period, eventually reduced quality of life, and prolonged return to work can be seen disadvantageous (15).

According to the current meta-analysis, a conservative treatment attempt seems to be associated with a significantly higher risk for non-union. This is in line with a previous meta-analysis by van de Wall et al. (15) who, apart from nine observational studies, also pooled results from two RCTs. Of note, effect estimates of observational studies and RCTs in that study were comparable, wherefore the authors considered the potential for confounding due to the retrospective non-randomised studies rather minor (15). Furthermore, taking into account that surgery is often indicated in case of open injuries, multi-fragmentary fractures, and considerable displacement – all of which may increase the risk for non-union – the overall higher risk for non-union in case a conservative treatment is chosen appears even more striking.

Regarding different surgical exposures, the risk for non-union was not significantly different between anterior/anterolateral and posterior approaches to the humeral shaft. Furthermore, we observed a non-significantly different non-union risk when comparing IM with ORIF, being in line with previous meta-analyses (5, 59, 60, 61). This contradicts common knowledge that open reduction leads to significant exposure of the fracture site, which could potentially – together with required periosteal stripping to allow anatomical reduction – limit blood supply and thus impair fracture healing. For the same reasons, ORIF may be associated with an increased post-operative infection risk in comparison to IM, an assumption supported by the results of the current meta-analysis. In fact, a nearly two-fold increased risk for post-operative infection was observed for ORIF in comparison to IM. Our observations are in line with a recent met-analysis by Beeres et al. (59), albeit contradicting findings in previous ones (5, 60, 61). Notably, the type of surgical exposure was non-significantly associated with altered risk for post-operative infection in our meta-analysis, although one should bear in mind that the two studies included had been retrospective in nature.

The current systematic review and meta-analysis have some limitations that have to be considered. First, the majority of articles included described retrospective studies, wherefore non-random assignment to one or the other treatment arm has to be assumed. Secondly, several studies had to be excluded as not providing sufficient information on the outcome variables of interest. Thirdly, different surgical exposures chosen for ORIF (when compared with MIPO or IM) were not considered in the analyses as the main goal was to identify differences between surgical techniques exposing and not exposing the fracture itself. Fourthly, we did not perform adjusted meta-analyses for underlying differences between groups due to small sample sizes. Fifthly, time to union and restitution from iRNP were not analysed, as both outcomes depend on frequency of examinations scheduled that may be more prone to bias than steady outcomes as infection, post-operative radial nerve palsy, and non-union.

According to the current meta-analysis involving 43 studies and 7688 patients with humeral shaft fractures reporting on outcomes non-union, post-operative radial nerve palsy, and infection risk, the method of choice when aiming at secure bony union appears to be surgery, albeit risk for radial nerve palsy has to be considered, especially in case a posterior rather than anterior/anterolateral approach, and ORIF rather than MIPO or IM is chosen. Also, higher infection risk following ORIF in comparison to IM should be considered upon treatment planning. Yet, evidence on best treatment option for humeral shaft fractures remains moderate, taking into account the limited number of randomised studies available, as well as the multiple factors contributing to decision making.

A L has received Institutional Educational grants from Johnson & Johnson, Alphamed, Implantec, Amgen and Medacta not related to this publication. F J S declares receiving travel grants from AOTrauma and ÖGU. All other authors declare that there is no conflict of interest that could be perceived as prejudicing the impartiality of this study. 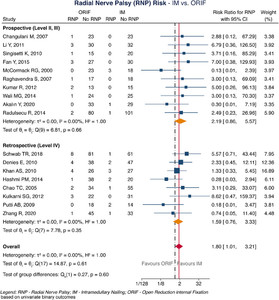 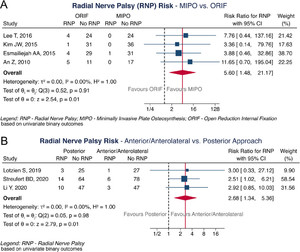 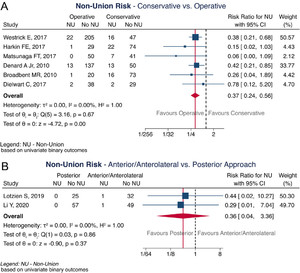 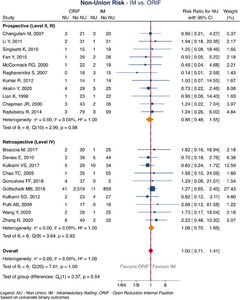 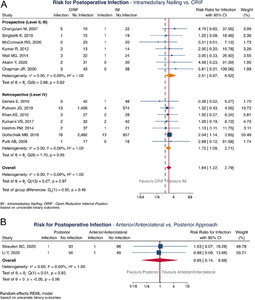