Extensor mechanism failure is an uncommon but serious complication after primary or revision total knee arthroplasty (TKA). It is associated with significant morbidity and reduced quality of life due to extensor lag, instability, difficulty walking and/or pain. Its incidence is reported to be between 0.1% and 2.5% in all TKA but revision TKA is thought to carry a higher risk.1–4

Extensor mechanism failure can present as quadriceps tendon rupture, patella fracture (Fig. 1) or patella tendon rupture (Fig. 2) or avulsion which can occur either intraoperatively or postoperatively. Intraoperative failure of the extensor mechanism is usually related to gaining exposure to a stiff knee or over resection of the patella during patella resurfacing. Postoperative failures could be due to trauma, malrotation, chronic patella maltracking, and poor blood supply.1 There are also other systemic factors predisposing to extensor mechanism failure, summarized in Table 1.

How to avoid extensor mechanism failure

Extensor mechanism failure can occur during surgical exposure of a stiff knee. When performing a medial parapatellar arthrotomy, it is important to leave a sleeve of periosteal tissue medial to the tibial tubercle and carefully elevate a maximum of 40% of the tibial tubercle to reduce the risk of patella tendon avulsion from its insertion. This will also allow a satisfactory repair during closure of the arthrotomy. If the knee is stiff preoperatively and access is difficult, it is our routine practice to consider a tibial crest osteotomy to avoid loss of extensor mechanism intraoperatively.2,3,7

There is evidence that previous lateral release of the knee increases the risk of extensor mechanism failure in TKA. This is due to compromised blood supply from injury to the superior lateral genicular artery. This can be avoided by staying as far lateral as possible to the patella when performing a lateral release.8

In revision TKA, there is likely to be femoral bone loss. Femoral bone loss should be addressed appropriately depending on its size using polymethyl methacrylate cement or augments to restore the joint line. Undersizing a femoral component to accommodate femoral bone loss will lead to joint elevation and must be avoided. The three-step technique described by Vince et al to re-establish the tibial platform, stabilize the knee in flexion, and finally stabilize the knee in extension, can be a valuable technique to ensure correct joint line position.17

Intraoperatively, there are several useful anatomical landmarks, including the fibula head, tibial tuberosity, lateral epicondyle and medial epicondyle.18 However, the measurements using these landmarks are variable, which negatively influences the use of these methods. Okzurt et al in a cadaveric study described different ratios using the transepicondylar width and the medial and lateral epicondyles to determine the anatomic location of the joint line in revision TKA surgery. The limitation of this method is that it is only useful with intact epicondyles.19

The joint line should be restored whenever possible and the maximum acceptable joint line elevation is 4 mm.19 Preoperative planning using radiographs of the contralateral knee can help the surgeon to determine the exact native joint line before surgery.20 In a TKA, the joint line position can be measured using Figgie’s method on a lateral knee radiograph: the distance from the superior face of the tibial component to the top of the tibial tubercle.21 Porteous et al modified the method using the distance between the most distal part of the femoral component and the top of the tibial tubercle.18 If excessive joint line elevation is found preoperatively prior to reconstruction of a failed extensor mechanism in TKA, a revision TKA should be also performed to restore the joint line and prevent failure or recurrence.

Partial rupture, extensor lag of less than 20° and undisplaced patella fracture with intact extensor mechanism function can be treated conservatively in an extension splint or plaster for six weeks.8,22 Conservative treatment may also be acceptable in elderly, low-demand patients. However, surgical treatment is recommended for more active patients as conservative treatment often leads to extensor lag and difficulty in walking. Surgical treatment will depend on the location of disruption and whether it is an acute or chronic disruption.

Acute rupture can be treated with direct repair using drill holes or suture anchors for avulsion of the tibial tubercle and end-to-end repair for midsubstance tears.1,23,24 However, re-rupture rate is high in both cases and graft augmentation is recommended. Repair of the patella tendon is often bulky and achieving a tension-free wound closure can be difficult. In these cases, a rotational soft tissue flap such as a medial gastrocnemius flap to achieve soft tissue coverage may be required.25 Management of acute and chronic patella tendon ruptures after TKA is summarized in Fig. 3.

Type 1 fractures (well-fixed component and intact extensor mechanism) can be treated conservatively in an extension splint with good to excellent results. Type 2 fractures are associated with disruption of the extensor mechanism with a stable or loose implant and should be treated operatively. Type 3 fractures are associated with a loose patella component but intact extensor mechanism. Asymptomatic Type 3 fractures can be treated conservatively. If symptomatic, the treatment options will depend on the patella bone stock. If there is adequate bone stock, the fracture can be fixed and the patella component removed or revised. Partial or total patellectomy will be required if the patella bone quality is poor. The remaining extensor mechanism is advanced distally and repaired. Patellectomy provides good pain relief but often leaves the patient with residual extensor lag and an unsatisfactory functional outcome.27

Based on the above principles, a treatment algorithm is recommended in Fig. 4.

Primary repair of the chronic extensor mechanism failure has a very high failure rate with unsatisfactory outcome and has therefore been abandoned.2,22,23 Reconstructive and augmentation options include autograft, allograft, synthetic graft and medial gastrocnemius flap.2,3

The semitendinosus tendon is the most commonly used autograft for reconstruction of chronic extensor mechanism disruption.2,28 It can also be used as an augmentation for acute primary repair as discussed earlier.22 The semitendinosus autograft can be used in reconstruction of patella tendon rupture or avulsion. It was first described by Cadambi and Engh.28 The semitendinosus tendon can be harvested through a separate posteromedial incision. Its insertion as part of the pes anserinus is left attached and the tendon is traced proximally. The tendon is then detached proximally at the musculotendinous junction using a tendon stripper. The tendon is passed under the soft tissues to exit through the anterior incision. A transverse drill hole is made through the patella and the tendon is tunnelled through from a medial to lateral direction. The free end of the tendon is then sutured onto itself or the proximal tibia. If additional augmentation is required, a gracilis tendon can be used in a similar fashion.28–30 However, the semitendinosus graft can only be used if the patella is not significantly retracted and there is good bone quality remaining in the patella.2,3

Browne and Hanssen34 described using a synthetic mesh (Marlex mesh, C.R. Bard, Murray Hill, New Jersey, USA) to reconstruct chronic patella tendon rupture. The mesh is fixed onto the proximal tibia through a small trough and secured with bone cement and screw fixation. The mesh is then tunnelled through the patella tendon and secured proximally with overlapping of the quadriceps tendon. Their study included 13 patients with chronic patella tendon rupture, all treated with mesh reconstruction. Nine out of 13 (69%) had good outcomes with < 10° extensor lag and no progressive loss of extension. Three had failures within six months and one had recurrent infection. The authors emphasized the benefits of using a synthetic material, which include cost, availability, immune reaction, disease transmission and stretching of allograft causing progressive extensor lag over time.34 A subsequent publication by the same group demonstrated 84% of 77 patients who underwent extensor mechanism reconstruction using synthetic mesh have intact reconstruction with excellent functional outcome at a mean follow-up period of four years.35

Other synthetic grafts such as polyethylene terephthalate,36 Dacron37 and polypropylene mesh38 have also been used as augmentation in complete quadriceps tendon repair after TKA with variable results.

Recent systemic reviews have shown equivalent success for allograft and synthetic mesh with a 25% failure rate in both. However, both reconstruction techniques carry a high risk of complications, including infection and failure with persistent extensor lag.39,40

A gastrocnemius flap may be required for extensor mechanism reconstruction in cases where there is significant bone loss of the proximal tibia, making Achilles tendon allograft and extensor mechanism allograft not possible, or when additional soft tissue coverage is required around the anterior aspect of the knee.26,41

The medial gastrocnemius muscle is mobilised, leaving its proximal attachment. It is then brought anteriorly to cover the anterior aspect of the knee and sutured onto the underlying tissue. The tendon end of the flap is then repaired onto the quadriceps tendon.2,25,41

Jaureguito et al41 reported overall good outcomes with improvement in range of movement and mobility, and reduction in extensor lag. In another study by Busfield et al,25 seven patients had a mean extensor lag of 13.5° (range 0–50°) at an average of 21 months follow-up. All patients returned to independent mobility.

In all extensor mechanism repair or reconstruction, the repair or graft must be tensioned with the knee in full extension. The repair or reconstruction should not be assessed intraoperatively as it usually stretches out and can cause extensor leg if not tensioned in full extension. The knee is usually immobilized in an extension splint for six weeks, following which range of motion is gradually increased in a hinged knee brace.2,3

PJJ reports an educational contract with DePuy Synthes and receives royalties and consultancy fees from DePuy Synthes, outside the submitted work.

BVB reports an educational contract with DePuy Synthes and has received speaker fees, outside the submitted work.

The other authors declare no conflict of interest relevant to this work.

This article is distributed under the terms of the Creative Commons Attribution-Non Commercial 4.0 International (CC BY-NC 4.0) licence (https://creativecommons.org/licenses/by-nc/4.0/) which permits non-commercial use, reproduction and distribution of the work without further permission provided the original work is attributed. 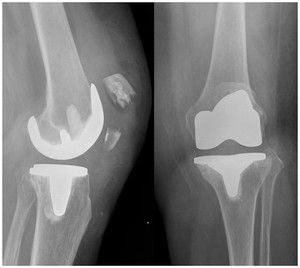 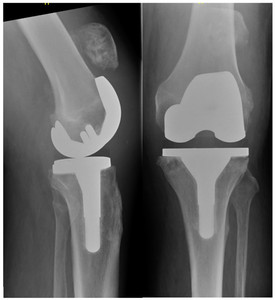 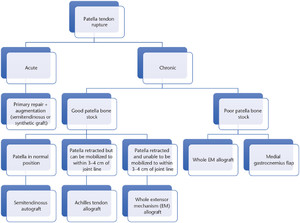 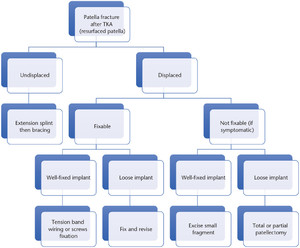 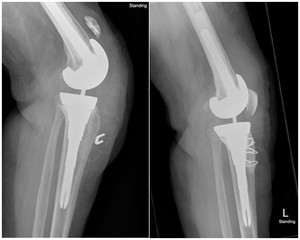