A review of common motorcycle collision mechanisms of injury

Though the incidence of motorcycle collisions (MCC) in the US has declined since 2007, motorcyclists are six times more likely to be involved in an accident than motorvehiclists.1 In addition, patients in MCC accidents have significant musculoskeletal morbidity, with 71.5% of patients requiring an orthopaedic consult.2 Therefore, it is imperative for our orthopaedic trauma surgeons to be able to easily recognize and treat the often-complex injuries associated with motorcycle traumas. Several classifications have been proposed in an attempt to organize such patterns based on the MCC specific mechanism of injury. The purpose of this article is to organize motorcycle trauma into recognizable injury mechanisms to better understand how these injuries occur.

For the purposes of this article, a motorcycle is defined as having an engine size greater than 150 cc. Through the review of the existing literature, we have identified distinct injury patterns with predictable mechanisms of injury. Though motorcycle trauma can be caused by several different mechanisms occurring in concert, we propose categorizing the injury patterns associated with motorcycle trauma into several distinct mechanism types which may facilitate recognition and treatment. A 2016 study which reviews motorcycle injury in the professional racing community classifies injury patterns into four broad groups: lowside, highside, topside, and collision (Table 1).3 These injury patterns can then be further broken down to describe how injuries relevant to the orthopaedic surgery community are sustained (Table 2).

Limb entrapment is a lowside crash mechanism that occurs when the lower extremity is caught between a fixed object and the motorcycle. This is an exceedingly common mechanism of injury. In fact, the lower extremities are the most common sites of orthopaedic injuries in MCC, with incidence in some studies ranging between 40% and 60%.4–7 The most common of these injuries are tibia fractures (20–30%) followed by ankle and foot injuries.4,7,8

Riders, in an attempt to recover from a pending lowside collision, may sustain lower extremity injuries described as ‘crash modifying manoeuvres’. These occur when a rider, in anticipation of a motorcycle losing tyre stability on a turn, will react to an impending crash by stretching out their leg in an attempt to right the motorcycle and catch themselves. The foot may impact first causing a hyperdorsiflexion, external rotation injury. Milder forms of these injuries can present as simple fracture dislocations of the foot and ankle with mangled extremities being seen with the more severe injuries.

Another subset of the entrapment type injury is the ‘tyre-spoke injury’ which are often complex soft tissue injuries where the foot becomes caught within the spokes of the motorcycle tyre. These are associated with severe soft defects as well as injuries to the calcaneus and achilles.9 Tyre-spoke injuries have a high risk of amputation.

Topside collisions describe riders being thrown over the handlebars of their motorcycle. Highside collisions describe riders falling away, opposite the side that their motorcycle is falling. These two crash mechanisms can generate similar injuries. In both cases the rider is thrown violently from the motorcycle. The distinction is whether the rider is thrown off the side or towards the front.

Head-leading implies a head-first collision in which the longitudinal body axis is aligned approximately parallel with the collision velocity,10 and often occurs after the rider is ejected from the motorcycle. This mechanism may be recognized by signs of frontal head trauma. Otherwise eyewitness account and helmet damage may suggest such an injury pattern. Head injuries are seen in 10–50% of motorcycle collisions and are the most common cause of fatality.4,8,10–14 Common injuries sustained from these mechanisms include facial soft tissue injuries and fractures, depressed skull fractures, linear fractures of the vault, and cerebral cortical contusions.15 As the head hyperextends, forces are transmitted through the cervical spine and cause injuries to structures at the junction of the head and neck, such as to the inferior temporal bone, basilar skull and cervical spine. In addition, patients may demonstrate traumatic brain injuries. The highest likelihood of traumatic brain injury (TBI) is associated with fractures of the zygoma, orbit and mandible, so recognition of these types of fracture should raise concern for TBI.15,16 Motorcyclists with head-leading injury should also have high suspicion of cervical injury as there is a strong correlation between head trauma and cervical spine injuries. Cervical spine injuries occur in 3% to 8% of patients with head injuries,17 -20 and are primarily concentrated in the upper third of the cervical spine.21

It is important to note that the more distal upper extremity injuries are often associated with lower mortality which may be attributable to a ‘crumple zone effect’.22 When a patient is thrown from the motorcycle, they instinctively extend their arms in front of them to catch and brace themselves prior to impact. The distal portion of the upper extremity impacts the object first, absorbing the energy of the collision and potentially mitigating more severe proximal trauma. The most common injuries from the crumple zone effect are distal radius fractures, which are called ‘motorcycle radius’ injuries.23

The collision injury mechanism is the cause of direct impact with a fixed object, another motorcycle, or vehicle.

Fuel tank injury occurs when a motorcycle comes to an abrupt stop, and the momentum of the driver creates high peak loads between the rider’s pelvis and the motorcycle fuel tank. In one study, 85% of the pelvic injuries sustained by the patient were due to this type of mechanism.24 The injuries most commonly associated with this injury mechanism include pelvic fractures and bladder injuries. Bladder injuries tend to be found with more mild impact injuries, whereas fractures to the anterior and posterior portions of the pelvis suggest a higher velocity at the time of impact. The fracture characteristics of these injuries often resemble Anterior Posterior Compression types 2 and 3 pelvic fractures.25 Typically, a routine anteroposterior (AP) pelvis radiograph is part of the initial trauma workup as the incidence of these pelvic ring injuries is as high as 13%,4,8 with one study demonstrating 13% mortality.8

More distally, ‘motorcycle thumb’ (Fig. 7) injuries can be encountered. These injuries occur secondary to the handlebar during impact. During a collision, the rider braces themselves by locking their elbows and griping the handlebars. The resultant force is directed into the palm and metacarpal base. Though these are less critical injuries, the thumb carpometacarpal (CMC) joint is injured approximately 50% of the time and the thumb ulnar collateral ligament is injured 20% of the time.29

Motorcycle injuries create a significant burden within the orthopaedic scope of practice. It is imperative that orthopaedists be familiar and comfortable with the scope of injuries that may present with motorcycle trauma. Motorcycle patients, as with other trauma patients, are at a high risk of sustaining severe injuries and should be evaluated and triaged under ATLS guidelines. While we recognize the limitations of fitting every MCC with these mechanisms of injury, they facilitate the recognition of orthopaedic injuries in these patients. These mechanisms, however, should not be viewed as an alternative to trauma evaluation guidelines. Classifying motorcycle injuries into distinct patterns so as to better recognize and treat them is a viable approach to better caring for these often-complex poly-trauma MCC patients.

The authors declare no conflict of interest relevant to this work. 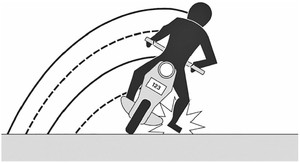 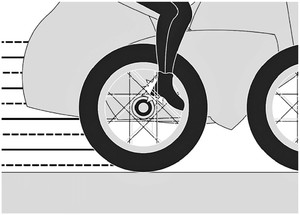 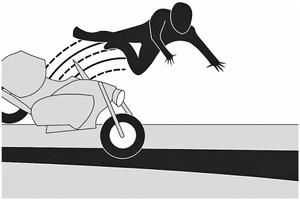 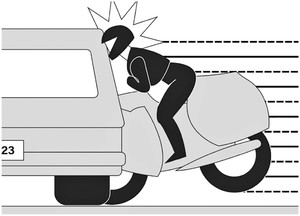 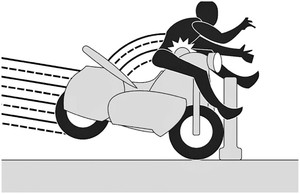 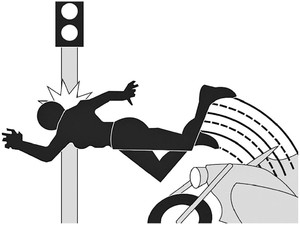 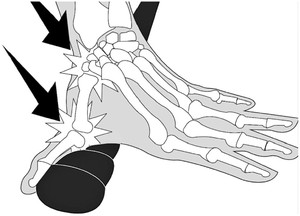