Outcome of total knee arthroplasty in patients with poliomyelitis: A systematic review

Poliomyelitis is a highly infectious viral disease, predominantly affecting young children, with long-standing sequelae into adult life (post-polio syndrome [PPS]). Additionally, adults can also be infected primarily in the de novo setting. The virus is spread via the faeco-oral route and infects the central nervous system. Spread occurs via the bloodstream or by retrograde axonal transport to the central nervous system. The infection is most frequently subclinical, but headaches, gastrointestinal disturbance, malaise and stiffness of the neck and back, with or without paralysis, may occur. The ratio of unapparent to paralytic infections may be as high as 1000 to 1 in children and 75 to 1 in adults, depending on the viral type and social conditions.1 The disease can be fatal if the respiratory muscles are involved. Although there is no cure for poliomyelitis, vaccination is highly effective. Introduction of the vaccine in the 1950s has made worldwide eradication a possibility. The disease is, however, still endemic in a few countries such as Nigeria and Pakistan.2

Poliomyelitis is characterized by loss of motor neurons, which may cause flaccid paralysis, muscle wasting and hyporeflexia.3 It can involve any motor neuron but commonly affects one or both lower limbs with variable severity. The quadriceps muscle is frequently affected. Patients with limb paralysis develop abnormal alignment, generalized hypotonia and ligamentous laxity, which predispose to knee pathology at a young age. Early joint salvage options include soft-tissue releases and corrective osteotomy to improve congruity, alignment and stability. However, when painful osteoarthritis (OA) develops, especially in the presence of ligamentous laxity producing painful hyperextension, total knee arthroplasty (TKA) is indicated. TKA in these cases is technically challenging because of the abnormal osseous and non-osseous aberrant anatomical knee features. These include articular and metaphyseal angular deformities, external rotation of the tibia, excessive valgus alignment, bone loss, narrowness of the femoral and tibial canals, impaired quadriceps strength, flexion contractures, genu recurvatum and ligamentous laxity.4 Furthermore, abnormal lower limb rotational profiles often predispose to a chronically subluxed or dislocated patella.3,4

It is thought that 12 million to 20 million individuals are living with poliomyelitis sequelae worldwide, with an estimated 120 000 in the UK.5 That said, little information is available concerning the results of TKA in limbs affected by poliomyelitis. We therefore performed a systematic review of the literature to determine the outcomes, complications and survivorship of TKA in patients with poliomyelitis-affected limbs.

MEDLINE and EMBASE were searched on 1 October 2016 to identify relevant studies in the English literature describing the results of TKA in patients with poliomyelitis between 1980 and October 2016. Keywords used for the searches were ‘total knee arthroplasty’ OR ‘total knee replacement’ AND ‘poliomyelitis’. The reference list of the relevant articles was explored to find additional papers.

Inclusion criteria included all papers that described the results of TKA in patients with poliomyelitis published in the English language. Isolated case reports/series with five or fewer patients were excluded. The included articles met the PICO criteria for systematic reviews (Population, Intervention, Comparison and Outcomes).

After screening of the titles and abstracts, the full text of the articles was obtained and reviewed. Two reviewers (AP and RD) extracted the data through a standardized data collection form. Three reviewers (AP, RD and SH) checked the data for accuracy and any inconsistent results were handled by discussion. Data concerning the number of patients, follow-up period, type of implant, type of fixation, complications, re-operations, revision rate and functional outcome were extracted and entered into a spreadsheet. Figure 1 represents a PRISMA flowchart illustrating the search strategy and number of records screened and included.

A total of 14 eligible articles were identified. After reviewing the full text, a total of six studies1,2,4,6,7,9 satisfied the selection criteria and search strategy. The 8 excluded articles did not meet the PICO criteria.

All studies were small- to medium-size retrospective case series (n=9 to 17) describing the outcome of TKA in patients with poliomyelitis-affected limbs. The range of follow-up in the studies was 3.5 to 6.8 years.

All studies reported significant improvement in knee function and patient satisfaction following TKA. The mean post-operative American Knee Society Score (AKSS) was 75.6 (50 to 85) in five studies. The Oxford Knee Score (OKS) was 31.5 in the sixth study.

This review demonstrates that although TKA in limbs affected by poliomyelitis is a technically challenging procedure, it can be fairly successful in improving knee function and patients’ quality of life post-operatively. The reported improvement in functional outcome and patient satisfaction was significant in all studies in this review. The overall revision rate was 7% at a mean of six years.

TKA in a limb affected by poliomyelitis is technically challenging owing to several factors, including the poor bone quality, knee hyperextension, cruciate, capsular and collateral ligament laxity, valgus alignment and patella baja. To minimize problems with exposure caused by patella baja, we recommend the use of techniques to improve patellar mobility, such as lateral retinacular release, medial soft-tissue release or quadriceps snip. Osteotomy of the tibial tubercle may be a useful adjunct to facilitate exposure in some more severely affected limbs.

Knee hyperextension, in particular, is a common pre-operative finding in this patient population and poses a challenging reconstructive problem for arthroplasty surgeons. Thirty-six patients (44%) in this review demonstrated hyperextension (5° to 30°) at presentation. Hyperextension is useful in patients with diminished quadriceps strength as they rely on locking their knee in full extension to walk. Attempting to correct this during TKA may negatively impact walking following surgery by limiting the patient’s ability to lock the knee in full extension.6 However, permitting knee hyperextension post-operatively risks further stretching the soft-tissue constraints and worsening of the hyperextension deformity leading to instability. As a compromise, the authors of one study in this review7 used a customized rotating hinge knee design with 5° of hyperextension built-in and reported encouraging results. In the remaining studies,3,4,8,9,10 when condylar knee designs were used, hyperextension was overcome using a combination of techniques, including under-resection of the distal femur, increased resection of the posterior femoral surface, increasing the tibial slope and subsequent intra-operative balancing of soft tissue and ligaments after bone resection.

Ten of 36 knees (28%) in this review developed recurrent hyperextension post-operatively (five CRs, four CCKs and one RHK). Only two cases required revision surgery at 3 and 12 years post-index surgery. Both were revised to more constrained implants (CR to PS and CCK to RHK). The issue of whether to use constrained implants is debated, with the rationale of using hinged prostheses in more severely affected patients with poor muscle power to provide intrinsic stability because of the increased risk of recurrence of hyperextension and ligamentous laxity in these patients and poor long-term outcome when a conventional TKR implant is used.10 Tigani et al describe that previous criticism of more constrained implants is no longer justified as modern rotating hinge designs more closely mimic physiological kinematics, therefore reducing stress at the implant bone interface.

PPS refers to new, late manifestations occurring many years after acute poliomyelitis infection. Studies have shown occurrence of PPS is in the range of 28.5% to 64%, with an average time of about 35 years.11 The most commonly accepted criteria for diagnosis was described by Mulder in 1972 and essentially describes an acute deterioration in a patient with known polio following a period of stability of > 15 years.11 In the debate about choice of constraint, Tigani et al state that a rotating hinge prosthesis may protect against functional deterioration in the event of a late PPS.

Overall, ipsilateral quadriceps power was equal to or higher than antigravity strength (⩾ 3/5) in 61 knees (74%) and < 3/5 in 21 knees (26%). The authors of the reviewed studies advised caution before undertaking TKA in limbs with less than antigravity quadriceps strength. Such patients had an increased risk of poor pain relief, recurrence of hyperextension and ligamentous laxity, and a poor long-term functional outcome when a conventional total knee implant was used.

The findings of this review support the use of TKA to alleviate pain and functional limitation in poliomyelitis patients with knee arthropathy. Post-operative patient satisfaction and functional improvement is similar to other patients; however, the revision rate is higher. Quadriceps muscle power is an important prognostic factor for functional outcome and patients should be counselled about this pre-operatively. The use of constrained implant designs is recommended in the presence of less than antigravity quadriceps strength. Irrespective of the type of implant used, meticulous intra-operative balancing of soft tissues and restoration of alignment are crucial factors for achieving a good outcome.

PRISMA flowchart illustrating the search strategy and number of records screened and included. 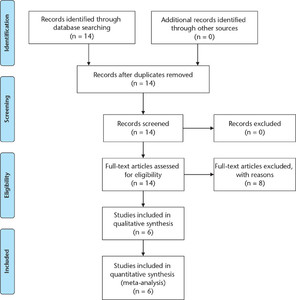